01363 891 363 info@bucklandtimber.co.uk
The Story of William Blight
BACK TO BLOG MAIN PAGE
One of the founders of Buckland Timber, William Blight, officially retired from Forest Management in March of last year. He has a busy, wonderful and fascinating life story and career history with wood.

I fluked the 11 Plus to go to Crediton Grammar School. One afternoon a week we used to do woodwork. I spent about a year making a toolbox for my dad out of solid mahogany, which is almost unbelievable now.

I made it using a pencil, a ruler, a little tenon saw and a small chisel, and I’d do one set of dovetail joints in an afternoon. I grew up on a farm and my dad left his tools all over the place, so I made it for him, but it made no difference! I still have the toolbox and will put it in the Crediton Museum one day.

I intended to go from the Sixth Form in Crediton to do agriculture in university, but a friend said he was going to do forestry and that was my decision made. I couldn’t get in immediately to Bangor so I did National Service first and then did my forestry studies from 1956-1960. I met my wife Anne in college who was a maths graduate and we married in 1962.

Off to Nigeria and then New Zealand

After college, I tried for the Forestry Commission and had a glowing reference from my professor as I had been student treasurer, but they only had an intake of five and he found out I’d been eighth. So, I applied for a job in West Nigeria where one of my classmates was from, and I spent 18 months managing tropical rainforests. (An interesting coincidence is that the mahogany for my toolbox was grown in this country). I wasn’t daunted by this as I’d been made an officer in National Service and as student treasurer, I already had a sense of responsibility and management experience.

I recently found notes of the first management plan I did for that area which has been accepted into the Bodleian Library record. The Zoo in Paignton also has a person helping to supervise that forest and they have taken a copy of the plan.

When I returned from Africa I had four months paid leave so I joined the research team at Alice Holt Forest dealing with tree genetics. I have a real passion for trying to grow quality.

Very early in 1963, we went to New Zealand and I joined their Forestry Service for four years. It was absolutely amazing and I had an exemplary mentor.

Most of New Zealand is planted with Monterey Pine because it grows quickly and my mentor was trying to work out a management system for it. Fortunately, I’m mathematical and together we came up with a system for managing the trees from a young age which is still, broadly, in operation today. It involved extensive tree measurement and is, probably, my greatest career achievement. I was sent to my own area, where I came across a farmer who pruned some Monterey Pine up to 35 feet using a ladder. The whole purpose of pruning was to grow logs without knots so they could go for making plywood. The farmer kindly agreed to let us have pruned logs to send to Auckland, where they successfully peeled to make the sheets for plywood. Subsequently, I marked hundreds of acres for thinning and pruning. In 1984 the pruned logs made four times the money for the forest.

We returned from New Zealand because Anne’s father got very ill and I worked for the Economic Forestry Group (the biggest private forest managers in the UK at that time) from 1967 to 1978, managing an area of woodlands in the South West and within three years I was managing the whole region.

We moved from a townhouse in Crediton to Redyeates Farm in the spring of 1972 before the rampant inflation later in that year. It was a very run-down farm of 30 acres with a 400-year-old house, a threshing barn and farm buildings. In the early years, we gradually restored order to the place, which had markedly increased in value with inflation. I remember a farmer writing against the general woes this brought, that he was glad of the inflation, because, at last, he could get back the money he had paid for land in 1927. In the early 1980s, I became concerned when our Chancellor had to go to the IMF for funds, so we sold off 20 acres, paid off our mortgage and put some money in the bank. That left us with two fields on either side of the access lane. We planted Christmas trees in the smaller field and about the same time, I read that sugar maple in America was suffering what could be a catastrophic disease, with the possibility of wiping out the species as happened to American Chestnut in the early 1900s. So, I went to see ‘Maple’ Harris near Taunton and purchased 100 seedlings and planted them, mostly in the smaller field, so that there was an independent resource for future research. Fortunately, the disease was much less virulent than feared.

We did well on Christmas trees, particularly in the early 1990s when the economy was depressed and extended the planting into the bigger field. At about that time our University colleague set up a business selling walking sticks and we grew the ash to make ‘cross head’ sticks for him. Planting must be in my bloodstream, because in the late 1960s I arranged the planting of the larch in Ralph’s Buckland Wood, that we use at Buckland Timber now.

The extensive lawns were taking a day a week to mow, which did not seem a very productive exercise, so we sold the house, buildings and orchard in 1995 and moved into the village. It was a sad departure because our two children had grown up there, but we had to be realistic. That left us the two fields, which were mostly planted except for the western end of the larger field.

In about 2000 I read that some treated wood had been used in a barbeque making some people very ill and had caused two dogs to die. That seemed to indicate that treated wood was likely to come under review and that durable wood should make a revival. Consequently, I planted 5000 Sweet Chestnut in the vacant land, which we extended into the Christmas tree areas in subsequent years. In the last decade or so, the chemical for treating non-durable wood has been modified (and weakened) and Chestnut stakes have become readily available, so it appears we read the tea leaves correctly. Turning the crop into coppice-with-standards has produced small material for making trellises, hurdles, picket fence panels and rose frames. We are ready to produce farm fencing stakes and strainers this year.

Forestry and the environment go hand in hand and the environmental benefits have been very rewarding. We have moles, (which I have not seen for many years in our local countryside), and I’ve even seen a grass snake, twice. The insect life is abundant and the grey squirrels not much less so (unfortunately). Rabbits and roe deer are present, tolerated, but not very welcome for the damage they cause. Birdlife is prolific and to our joy, we found the nest of a tomtit in a small bramble patch this spring.

There is so much at Redyeates that keeps me going.

How Buckland Timber was born

We started Buckland Timber in 2012 because Ralph and myself had woodlands next to each other. The area of productive timber was about 200 hectares. On that 200 hectares, there were about 80,000 cubic metres of timber growing which translates into about 2500 lorry loads.

Selling logs in the round before they were processed will get you about £12-15 per cubic metre and you’ll get about three times that for boards. We considered a small sawmill, as I used to manage one, but sawmills only make money going out and doing jobs with things they produce.

One day while at Bangor I saw a small Ferguson tractor being suspended by four arches of larch glulam timber that came to a peak and since then I’ve always had my eye on laminated timber. I knew it couldn’t have been done with solid wood.

There was only one other laminator in the country in West Sussex, laminating Sweet Chestnut. They were keen for us to work together but there were too many differences and too much distance.

Wood is something amazing, there’s no doubt about it. It’s already evident that much more lamination will come. 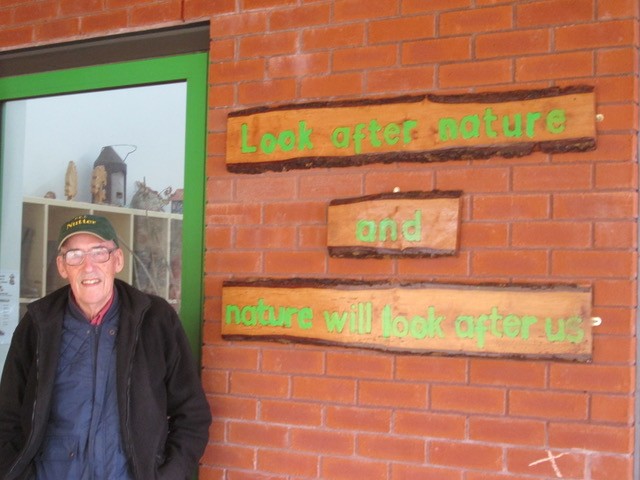 About five years ago I started as a helper in the Ladysmith’s Infant School in Exeter with the five-year-olds. One day a little girl came up to me and said, “We must look after nature.” and my instinctive reply was, ” And nature will look after us.” As a result, the sign in the photo was put up on the wall of the Forest School. I wrote it up for the Institute of Professional Foresters magazine at the time but I still find it an incredible observation from a five-year-old.
← CLT versus Tongue & Groove A Timelapse Tour of the Factory →